I just read the latest in the series of Inspector Lynley novels by Elizabeth George. I was introduced to these three decades ago when a friend was working at Random House in New York and shared proof copies. And so I read A Great Deliverance. I’m always a little suspicious of Americans writing stories set in the UK ( a little odd for me, as an American who loves all things British!) but I was impressed with the research and detail.  And all of these novels have a lot of detail – maybe too much, sometimes – but it is usually fairly straight-forward to follow the plot.  And, if you’ve seen the adaptations on PBS with the dark-haired Nathaniel Parker (very good) you’ll need to wrap your mind around the blonde Lynley in the novels!

The Punishment She Deserves is the twentieth book in the series. This one is less about Lynley and more about his partner Barbara Havers. Havers and Lynley come from different classes in Britain, Lynly being a peer and Barbara just someone who grew up in lower-class London. Throughout the books, George makes a lot of Barbara feeling less than adequate – often, more than should be done, I think. One can grow a bit weary of her wondering if she’s done the right thing and so on. But in this book,  Havers really shines and George does a lovely job of bringing Havers forward. I always want to cheer for Barbara in any of the books, but in this one I was really on the edge of my imaginary seat as I followed her though this convoluted case that she champions when her superiors want to put it aside.

But this book is not only about Havers. It is also about Isabelle Ardery, Havers and Lynley’s direct superior who really wants to get rid of Havers. She keeps threatening to transfer her to Berwick-upon-Tweed, way in the NE of England on the North Sea. She tries to find every way possible to make sure Havers messes up in some way. This story is also about Isabelle’s alcoholism, and George does a very fine job of describing Ardery’s illness and its consequences.

And this book is about families. Along with Havers and Ardery, George has us wondering about, and finally rooting for, four women in three generations in one family.  (To tell more at this point would be a spoiler.)

If you haven’t read these novels, here is the list in order:

If you are already a fan, get started on The Punishment She Deserves. You’ ll be wondering which “she” is deserving of punishment. 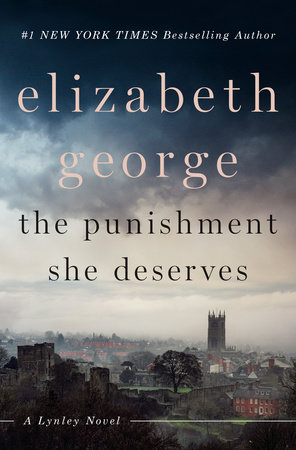