A couple years ago I read a wonderful novel by Derek B. Miller, an American married to a Norwegian. They live in Norway. The book is Norwegian by Night. It’s about a Jewish man from Brooklyn who goes to live in Norway with his daughter and her Norwegian family. The premise is delightful from that aspect, but this funny, endearing, and sad novel is a terrific read. Miller is a great writer, and he takes us not only into the obvious stress of an older American living in a country where he doesn’t speak the language, but also into the immigrant tensions that are all over Scandinavia. Sheldon Horowitz gets to know his neighbor, a Palestinian immigrant who is living there with her young son. When she is stalked and attacked by some people from her first world, Sheldon helps the boy escape and they head off into the night being hunted both by the Norwegian police and the gang that killed the boy’s mother.

Now a new book has just come out (April 3, 2018) by Miller titled American by Day. This is easily the best book I have read this year. Dedicated to Sheldon Horowitz, the protagonist of Norwegian by Night (I love that!), American by Day features Sigrid Ødegård, the detective inspector from Norwegian by Night. This time she is looking for her own brother. He has lived in the US for many years, and he has now not been heard from for a couple weeks. So she goes to upstate New York where he has last been known to live to look for him.

With his characteristic wryness and humor (it’s pretty funny to read about her helping people pronounce her name correctly), Miller tells a powerful story that matches the headlines of our time – the police killing of an innocent black child, and the racial tensions and political divides of our time. Add into that a person new to American culture, and it is a powerful story. His writing about race and difference are amazing, and they open up endless possibilities for conversation.

Here are some excerpts:
Life has always seemed more real when you’re contending with gravity. Because in the end that’s what’s gonna get you. (p. 141)

He is the kind of person who is plugged in and becomes nervous when he is not. Marcus has students like him. The more they strive to express their uniqueness in those machines, the more conformist they become. (p. 189)

The longer he stared into her skin the more he wondered why humans – his humans – ever migrated from Africa to the Arctic; the ones with such a chronic sense of discontentment that they were led directly into Lutheranism. (p. 213)

People of color cry out, saying that we’re in pain, but they deny the pain and say it’s an individual pain, not a group one. They see the entire world through this individualism prism – or that’s what I call it in the article, anyway. It negates discussions of race and racism. In my view, this perspective is overpowering and insurmounyable naybe because it’s deeper than race. It’s deeper than politics. It’s a culturally organizing system. It’s how we achieve Americanness. It’s how we do Americanness. It’s a kind of performance. If this is true, America can win battles against racism in court or in passing new laws an adopting new policies, but we’ll never win the war on history and circumstance because it requires people seeing with different eyes; eyes that would force them to unravel and redefine their American selves. And that’s the one thing we can’t do, because it’s the only thing that binds us all together. One can’t escape the observation that America historically enslaves groups, but only frees individuals. (p. 217)

He could have shouted something, but his Lutheranism ran too deep. His edges had filed off and the stumps worn down by a culture that didn’t know how to sin and then repent and so suppressed everything and hoped that God wouldn’t notice. (p. 306)

You needn’t have read Norwegian by Night to get into American by Day. Both are exceptionally worthy ways to spend your reading time! 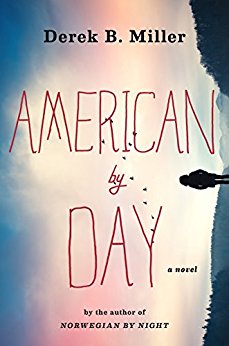